I’ve been invited to speak on a panel during Ireland week, in Los Angeles on Oct 19th.

For those that don’t know, I was Born in Northern Ireland, went to school there until I was 17, then moved to England to work full-time in the video game industry.

When I moved to the USA I lost my accent really quickly, however, what’s really weird is just how freakishly tall I am compared to most Irish people!

That said, I love helping Irish entrepreneurs and love going back to the old country.

I have 10 free passes, just email me if you want one! 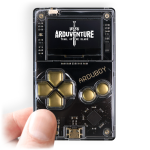 I’m SUPER EXCITED about the new Arduboy! This I think is the best way to learn to program computers, to start by modifying games and then to make your own. It’s way more fun than starting with “Hello World” like every long-winded book offers. As a freebie, you also get to learn about controlling electronics in the process. If you have a kid, get them one of these and spend some time playing with it, there are a TON of free games online to start with.

Rise of the Tomb Raider

I’m obviously biased when it comes to certain games (working for Sony PlayStation) so I try to avoid game-spamming.  As I’ve been in the industry a long long time, I’m lucky enough to get to vote on games I respect, and this is definitely one of them. The work that went into this game is pretty remarkable and I’d highly recommend you give it a try.

Mention the name Earthworm Jim, and many people will disappear into digital nostalgia. It was just one of many legendary video games developed by Northern Irish-born David Perry, who has lived in California for over 20 years.

Born in Lisburn, County Down, he went to school in Belfast and became fascinated by computers—especially making video games—and after getting some early games published, Perry moved to England for a developing job, then got a further offer to move to California. It wasn’t L.A.: It was Irvine, and he ended up living down by the beach—something he recalled as “being like Baywatch!”

Perry admits that today he’s seen as a veteran in the business. “I’ve been through plenty of wars and survived! Some are tough, but I think I’ve learned a lot of lessons (the hard way) and ultimately that gives you confidence going forward.”

In 2012 his co-founded venture Gaikai—a company that was involved in cloud-based game streaming technology—was sold to Sony Computer Entertainment for £380 million ($578.3 million), and so BBCAmerica.com wanted to ask for his tips on success in America.

Hire great people.
“I call them ‘hurdle jumpers’—people that don’t waste time pointing at all the hurdles and telling you endlessly why they can’t move forward: They just jump the hurdles.”

Work on interesting and meaningful projects.
“There are too many opportunities to ‘wash the dishes,’ meaning you’ll work for two years and get very little thanks. Great projects are the bait for hiring great people, and working on them is much easier when they feel they are inventing the future or making a game with some new experience or idea.”

Don’t let people say no.
“In the 1990s I used to drive for three hours to sit in Hollywood meetings with people that didn’t have the power to say ‘Yes.’ Call me impatient, but when I get the feeling a meeting has no possibility of a ‘Yes,’ then I avoid them; your job is to get decision makers into the room.”

Some people HAVE to say no.
“Equally, be aware that it’s dangerous to say ‘Yes.’ There are a lot of people very safe and secure in their jobs, just as long as they don’t put their neck out, and ‘No’ doesn’t get you in trouble. This helps you think about your pitch…”

Don’t lose anyone on the pitch.
“When you pitch something, remember the pitch is for them, not you. It’s about them, for them, and dealing with their concerns. So, ask yourself at every moment: ‘Did I lose anyone?’ If you lose anyone, they can kill your deal the moment you leave the room, when you won’t be there to defend it.”

Do your homework.
“Read these books: don’t ask why, just do it. They are all forms of modern thinking and break you free from just doing things the way they’ve always been done.”

The Lean Startup by Eric Ries
Yes! 50 secrets from the science of persuasion by Noah Goldstein, Steve J. Martin,Robert B. Cialdini
The Irresistible Offer by Mark Joyner
Start With Why by Simon Sinek
Hooked by Nir Eyal
Growth Hacker Marketing by Ryan Holiday

Don’t be greedy.
“A friend was offered $100 million for his company, but he decided to hold out for $300 million. The company went bankrupt and everyone lost their jobs. It was a disaster for everyone involved.”

Contribute your time.
“I’ve done countless hours helping schools, colleges, mentoring etc, and it’s some of the most rewarding work you’ll do. It’s inspiring, and you’ll be certain to meet raw talent; people that don’t know how amazing they are yet. You get to tell them!”

Attend conferences.
“I started to collect my conference badges, and now have hundreds on my wall. Why do conferences matter? You must never stop learning. You need to keep an eye on what everyone else is thinking, and you get to see in just a few days who are leading in any given space. Networking is key, so make sure you know who will be there, research them and meet them whatever it takes. Once you understand what audiences respond to, submit your own ideas as a potential speaker at conferences. They give you feedback, or maybe even a ‘Yes!’ Speaking is very valuable to your career, and a great example [of a conference for] the video game industry is the Game Developers Conference.”

Evolve.
“Think of the music industry, and how many amazing bands just disappear after one hit. It’s far too easy to get trapped in the one thing you do, so if you get the chance to evolve and learn in your industry, take it. Wear many hats, and see things from many perspectives; it makes you appreciate other people and what they do much more, and it will also create rapport when you meet new people. In my case, talking to a programmer is much easier if you’ve taken the time to learn how to program.”

As a glance at his website shows, Perry is always busy. But does he ever set aside time to play any of his old games?

“Not really. It’s like books; you write it, but you move on and don’t look back for a minute. I’ve worked on a lot of titles, and every now and again you get a No. 1 hit, and that changes everything. Then you are hungry for that experience again.”

Finally, Perry mentioned speaking on the phone to his mother in Northern Ireland that morning: “I said to her that there must be something in the water in America. I don’t know what it is, and maybe it’s just my optimism, but I believe that you can learn and do just about anything you put your mind to, as long as you start. I think that’s the meta-tip. I wanted to learn how to fly helicopters, but I procrastinated. I got an invite to try it and became a pilot later, but why didn’t I just start by myself? Why did I have to wait to be asked? Life is short, and these days I just start.”

#2 All opinions shared are my own, not those of Sony.